Many different factors attract and retain valued employees. One that is rising in popularity is  transparency—in all things—but especially with salary. Historically, financial institutions have been among the most transparent organizations and companies, ranking just behind the public sector and the insurance industry for open communication regarding pay. However, many credit unions are still struggling to achieve, or even decide on, the level of transparency they want in their organization. This could be because they know transparency is not without its challenges.

In many cases—and with good reason—organizations would rather shelve their plans for transparency than implement it poorly. The consequences of poorly communicated transparency, or poorly prepared employees, can be disastrous. Instead of aiding in attracting and retaining employees, transparency can lead to demands for salary raises, resignations, an increase in tensions between employees and a lower level of productivity and morale.

Credit unions considering modifying the level of salary transparency in their organization should consider the benefits and downsides of a change, as well as how they can implement it effectively and prepare their employees beforehand. Most importantly, credit unions should review their current policies to see if they’re keeping in line with the market and have processes that promote fair pay and communication before they make any changes. 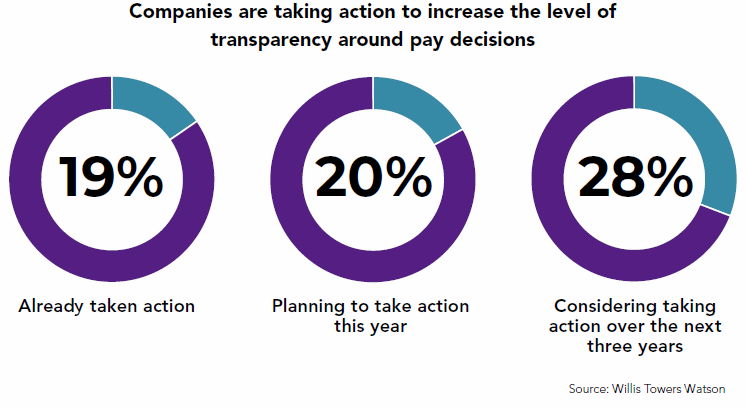 Before credit unions ask themselves whether or not they should or are ready to build a culture of pay transparency, they must first determine if their current compensation strategy is aligning the salary budget with the organization’s overall mission and business goals. This includes defining the role of base pay and assessing if they are in line with the market.

Overall, industries across the board are expecting an average salary budget increase of three percent in the next year, which has not changed significantly over the last several years. The overall total annual salary increase average only climbed two-tenths of a percent since 2011, indicating that most companies are remaining conservative with their budget increases, either due to economic uncertainty, lower inflation or other factors.

The most common reasons for an organization to have a higher salary budget than average is greater competition in hiring employees, labor shortages, economic improvement or changes to the market. Staying in line with market rates can mitigate retention concerns and improve hiring prospects. According to a recent study by the human resource consulting firm Mercer, retention remains the primary motivator for compensation decisions, while attracting new, talented employees is a close second.

The majority of organizations use a combination of performance rating and positioning within their salary structure to determine the actual merit award amount for each employee position.

For most organizations, the salary budgeting process has two main areas of focus: the salary range increase and the salary budget increase. The salary range increase is based on market data movement, which for 2019 is expected to average around 2.2 percent. Range changes may be influenced by other factors. Does your organization still need to budget aggressively to regain ground after a salary freeze from the economic recession? Is there a need to adjust compa-ratios to align better with the market? Do you want to lead the market?

As a general rule, most or all employees should be paid between the minimum and maximum rates established by the salary range. In a pay-for-performance system, employees are ultimately paid at a rate that is comparable to their long-term performance. A useful rule of thumb is that compa-ratios:

Ideally, every organization would want to move toward a greater degree of transparency with its employees. This can keep a company competitive when it comes to hiring valuable talent and it can keep employees happy when they see they’re being paid competitively. But therein lies the rub: if they aren’t being paid close to market rate, transparency could lead to an exodus of staff. To achieve the benefits of compensation transparency and avoid the ills, an organization should first examine its salary budget and see how close it can approach those rates.