Just How Distracted Are Consumers?

You’ve probably heard that consumers are more distracted than ever. But without understanding where, how, and how often your message is competing with other brands’ marketing efforts, it will be even more difficult to understand how to reach your audience through the noise.

Advertising is saturated—thousands of advertisers are trying to reach consumers through their desktop computer, mobile devices, TV, and digital out-of-home advertising—and consumers have too many options for media consumption. These options mean consumer attention spans are short. Credit unions need to make the best use of their time to get their message across, and that’s not always easy.

How often and why consumers are distracted

Consumers, especially millennials, are shown to be deeply distracted when interacting with all forms of media. A 2015 Nielsen and YuMe study found that 92% of millennials are using two screens at any one time, even if they don’t consider themselves to be actively multitasking. According to the recent study by Google and Ipsos, 72% of millennials multitask when watching television, doing things such as cooking, browsing the internet, or using their mobile device.

What captures our attention these days

Four things are shown to capture viewer attention across all types of screens: video content, quick-loading web pages, fast rendering, and important content placed above the fold on emails and websites. According to a KoMarketing and EConsultancy survey, 47% of visitors expect a homepage to load in two seconds or less. And 75% of all online videos published in 2017 were less than two minutes long, according to a 2018 Vidyard study.

Commercials are slimming down in length to meet these expectations. In the 1950s, it was normal for commercials to clock in at well over a minute, but that was cut in half by the 1970s, and eventually 15 seconds became the new norm. Online however, 15 seconds for a pre-roll advertisement on YouTube is an eternity. Viewers are likely to abandon the video or refresh the page rather than sit through the agony of a 15-second commercial. Thankfully, YouTube understands its viewer base and implemented the ever-present skip button, which essentially reduces all pre-roll ads to just the first five seconds.

The lesson that must be learned here is: capture your audience’s attention in the first five seconds of landing on your page or watching your video and you’re golden; don’t and you lose them to the dreaded skip button, a different screen, or another open tab on their device. 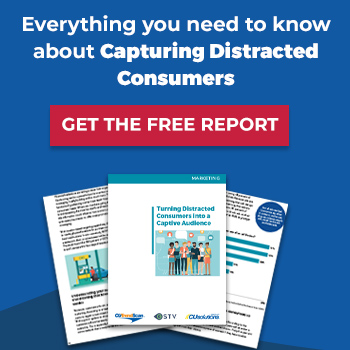 Request a Quote: Just How Distracted Are Consumers?